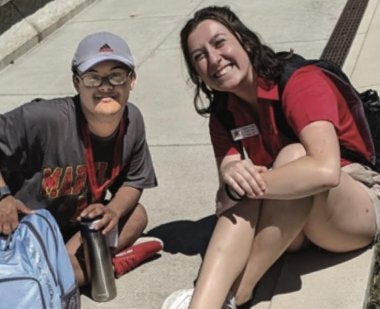 Hari Kannan was a middle schooler when he somberly told his mother the bad news: He has Down syndrome; therefore, he would be unable to clean his room.

Kannan and his mother, Vidya Thirumalai, who told the story, still chuckle at the ploy. Now 19, he has no doubt about his ability to accomplish his goals. That confidence (and a healthy sense of humor) helped the young man from North Potomac, Md., become one of two students in a pilot program this semester giving people with intellectual and developmental disabilities a chance for a University of Maryland education.

TerpsEXCEED, funded by a grant from the Maryland Disabilities Council and College of Education alumni donors, is the first program of its type in the state. Students— plans call for 5-10 per year after the pilot period—will audit carefully selected classes and take new offerings on career readiness and other skills, says Amy Dwyre D’Agati, TerpsEXCEED director and senior faculty specialist at the College of Education’s Center for Transition and Career Innovation.

Faculty, staff, and peer mentors from the college provide support, but students independently participate in the campus community, from dorm life to clubs to attending big games. In the end, they’re expected to graduate with two-year certificates as valuable in some ways as any Maryland degree.

“Research shows that if students get a bit of postsecondary experience, their job prospects and work hours go up,” D’Agati says. “Things get even better if they go through a full-length program.”

Although new for UMD, it’s a natural continuation of inclusion principles that have permeated public schools in recent years. “My own kids have been in school with kids with disabilities,” D’Agati says. “It’s not unusual to them. What’s stranger is that these students aren’t there when you go to college.”

Senior Vice President and Provost Jennifer King Rice, who helped develop the program as College of Education dean, says it puts a new and broadly beneficial spin on the campus’ diversity and inclusion goals.

“If you think about how K-12 schools have adapted, we’ve come to recognize inclusive environments are best for everyone; that’s something we also hear employers talk about,” she says. “These efforts to create more inclusive work and learning environments benefit individuals with disabilities, but they also help us all learn to live and work in diverse communities.”

Families dealing with disability liken the end of high school, and the disappearance of familiar education-based structures, to “falling off a cliff.”

Zach McKay, 25, who has autism, built a rich social life in high school in Ellicott City, Md.—he was named homecoming king, participated in theater productions, and was even voted “most likely to make you smile.”

“Then it ends—everyone else goes off to college and moves on, except he couldn’t,” says his mother, Kim McKay ’90, communications director at the Maryland Department of Disabilities. Now living in a townhouse in nearby Columbia and working in the service department at a local car dealership, McKay still harbored a dream of attending UMD like his parents and sister Alex McKay ’17, M.S. ’18. It had been reinforced in visits to her dorm and by attending celebrations after she played a central role in the Terps women’s lacrosse team’s 2017 national championship.

The whole family is thrilled at his acceptance into TerpsEXCEED—both at completing their Terp circle and helping to build the foundation of a program they hope leads to careers and personal discovery for others, said Dr. Wendell McKay ’88, an Ellicott City pediatrician and former Maryland cornerback.

“It’s a chance for our family to leave a little bit of a legacy,” he says. “We’re humbled.”

While Zach McKay is leaning toward a career involving athletics, he wants to take a few classes before choosing a focus. Kannan, however, is already set on becoming an advocate for people with disabilities, which he’s preparing for in a first-semester public speaking class.