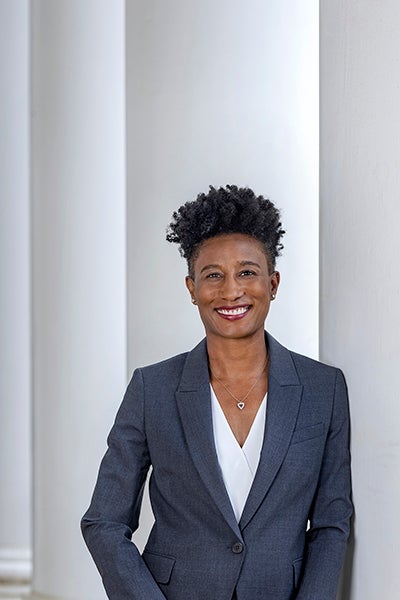 Kimberly A. Griffin (she/her) was appointed dean of the College of Education in 2022. She has been a member of the University of Maryland faculty since 2012. Griffin joined the College as an associate professor in the Higher Education, Student Affairs and International Education Policy Program, and later served on the dean’s leadership team as the associate dean for graduate studies and faculty affairs. In this role, she led efforts to revise the College’s tenure and promotion policy, as well as support and guide faculty hiring and graduate student recruitment. Prior to joining UMD, she was a faculty member at Pennsylvania State University, an assistant dean for graduate studies at the Stanford University School of Medicine, and an admissions officer at Stanford University.

A leader committed to excellence, care, community, and equity, Griffin is energized by the opportunity to collaborate with faculty, staff and students to advance the College and its goals. She is driven by education's ability to make an impact in schools and communities and has worked tirelessly throughout her career to maximize the connection between research and practice.

As a scholar, Griffin identifies herself as a “problem-based researcher” and her work aims to promote access, equity, and justice in higher education. Much of her current research and writing focuses on mentorship, career development, and faculty and graduate student diversity. Her research has been funded by the Burroughs Wellcome Fund, National Institutes of Health, and National Science Foundation. She has served as the Editor-in-Chief of The Journal of Diversity in Higher Education since 2018. Over her five-year term, her vision-driven leadership translated to notable growth in the journal’s readership, impact, and revenues.

Griffin’s work has been widely recognized for its relevance and effectiveness in addressing persistent problems in higher and science education.  She received the Promising Scholar/Early Career Award by the Association for the Study of Higher Education in 2013, and was named an Emerging Scholar in 2010 and Diamond Honoree in 2020 by ACPA.  In 2022, she was named one of the 200 most influential education scholars by Education Week.

Request form for the Dean's appearance

One of the advantages of being part of the COE faculty for 10 years before stepping in as dean in July 2022 was that Kimberly Griffin didn’t need to spend time learning her way around the sprawling UMD campus or struggle to remember the names of faculty and staff in the college. Instead, she’s dedicated much of her first few months to thinking deeply about where the field of education is headed, and the role the college can play during this time of rapid change. Griffin spoke with Endeavors about the scope of her career, how the pandemic both exacerbated inequities and created opportunities to address them, and the challenges that keep her engaged. She also shares some of her favorite self-care practices and the music that moves her, providing a glimpse into who she is as a Black woman and educator.

After attending UMD as a student and serving a decade on the faculty, what does serving as dean mean to you?
I’ve been thinking about this a lot. It’s a full circle moment for me. If I could go back and whisper in the ear of the 21-year-old who walked the hallways of the Benjamin Building and tell her that one day she’s going to be dean of the college, she would never believe it. It was a time when I was discovering that I liked research and might want to become a professor; and I had never thought of myself in that way before. The fact that I’m now dean is an opportunity to give back to a place that has given so much to me, a place that was the start of me becoming who I am.

What initially sparked your interest in a career in education?
I was a psychology major trying to figure out what I really wanted to do post-graduation. I was taking education classes and conducting research for a course on educational disparities, specifically studying the Black-white test score gap. I read so many academic papers on  the topic and can remember feeling angry. I had associated education with becoming a teacher, but I had this moment where I understood that there are people who study education and educational outcomes and work to solve big problems in the education field. I realized researchers focused on education can support teachers in doing their important work.

What keeps you motivated and committed to this work?
It sounds simple but there are problems to be solved. If I look at my research agenda, there’s always a problem at the core of every paper or project. I often ask my students to think about the thing that keeps them up at night. Whatever the problem is, I think there’s a solution. Over the years, I’ve honed my ability to understand complex problems and propose solutions that can make a difference. I like to think of myself as someone who talks about the hard things in a way that motivates, as opposed to defeats. If I’m going to talk about a problem, I want to discuss how we can work together to address it. When I see lots of problems, I’m like anybody else, I get overwhelmed and tired. Oftentimes, I want to shut down, but there’s so much at stake. We’re talking about issues that affect real people, and if I believe that
education can do what I think it can do, then it’s worth it.

What’s one piece of advice that you’ve received that you feel has prepared you for this role specifically?
Be yourself. I’ve received this advice countless times, but I think it’s sometimes easier to try to figure out who you are based on someone else’s expectation of you. But that doesn’t serve anybody. The hiring process is a great example. You shouldn’t put a false representation of yourself in front of the panel. They end up hiring who they think you are and they expect you to show up as that person. You can only be that person for so long. From my first faculty interview, I chose to be myself, to show up as myself. I wore my hair in braids, a decision that some people questioned, and I kept in my multiple earrings. I had to let them decide whether they wanted to hire me. If they did, great, and if they didn’t, I would be OK with that.

If you could create a mixtape with three songs that speak to who you are, or that motivate you, what three songs would you pick and why?
The first song is “Video” by India Arie. I’ve always said that if there was a theme song that played when I walked into a room, this would be it. It’s my walk-up music. It serves as a reminder to be yourself and everything will be alright. It is also mellow and chill and makes me smile every time I hear it.

The next song is “Freedom” by Beyoncé and Kendrick Lamar. There’s so much energy that surges through the song. Every time it says, “Winners don’t quit on themselves,” it reminds me that there will be moments when you just have to push through and show up, even when you’re tired.

The final song is “Finesse” by Bruno Mars and Cardi B. There’s just something nostalgic about that song. The first beat of it makes me smile and reminds me of being a teenager. It has a new jack swing and R&B vibe, and I love R&B.

Diverse: Issues in Higher Education | May 25, 2022
Dr. Kimberly Griffin Appointed Dean of the College of Education at University of Maryland

Chronicle of Higher Education | May 20, 2022
My Job has Fundamentally Changed

Inside Higher Education | October 21, 2020
The Souls of Black Professors

The Chronicle of Inside Higher Education | May 26, 2020
Being a Woman in Academe Has Its Challenges. A Global Pandemic? Not Helping.